Face masks are now front line in the fight against a global pandemic that has disrupted nearly all human life. Meanwhile contact-less solutions have become a best practice for avoiding disease transmission at retail point-of-sale, medical patient check-in, banking access, food distribution, and other essential activities. All three mainstream biometric modalities (face, fingerprint, and iris), which often empower these activities, experience unique challenges in the context of a pandemic:

A brief history of periocular recognition

Periocular recognition is one solution that can deliver better accuracy, ease-of-use, and safety, while not suffering from the same drawbacks of onerous sensor requirements, usability or occlusions of other modalities.

Today, with the release of the ROC Periocular algorithms, accurate identification can be achieved using solely the eye and eyebrow regions of the face. This is made possible through the same breakthroughs in deep convolutional neural networks and best-in-class software packaging that enable Rank One to deliver both high accuracy and hardware efficiency in the ROC SDK’s face recognition algorithms. 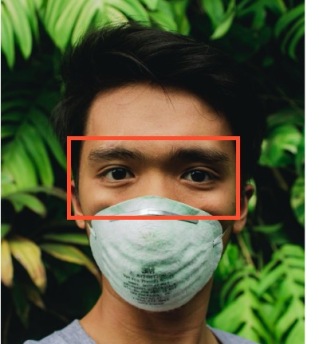 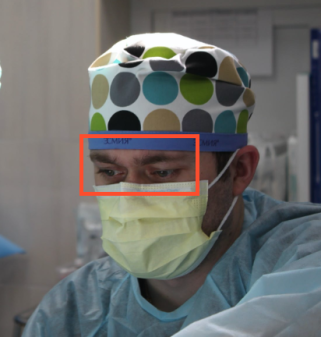 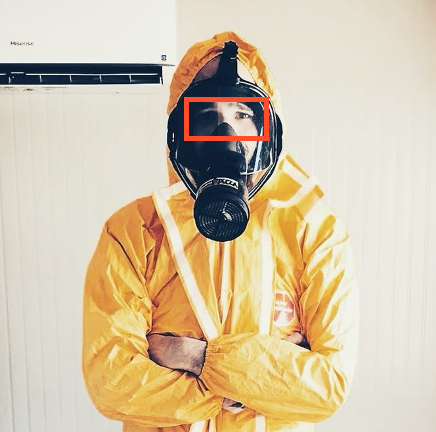 In the above examples, the periocular detector is able to rapidly detect a person, despite them wearing a mask. This successful person detection is one of the most profound ways that periocular recognition can outperform conventional face recognition in the presence of masked faces. That is, one of the biggest challenges presented by masks is that the initial face detection algorithms will have a higher incidence of failure. Known as failure-to-detect, or failure-to-enroll, if a biometric template cannot be created due to a failed detection, no identification can take place.

Once the periocular region of the face has been detected, it can then be processed to locate and represent the salient morphological features into a feature vector template. This representation process involves tens of millions of mathematical computations. And, similar to face recognition algorithms, the time required to perform this step can vary quite significantly based on a vendor’s ability to engineer efficient software. In the case of the ROC Periocular algorithm, this representation process is faster than the standard ROC FR algorithm, itself renowned for its industry-leading efficiency.

The template produced by the ROC Periocular algorithm can be used in the same manner as a  ROC FR template, which includes the common tasks of 1:1 identity verification or 1:N identification.

The ROC Periocular algorithm has been benchmarked for accuracy and efficiency against ROC SDK v1.20: 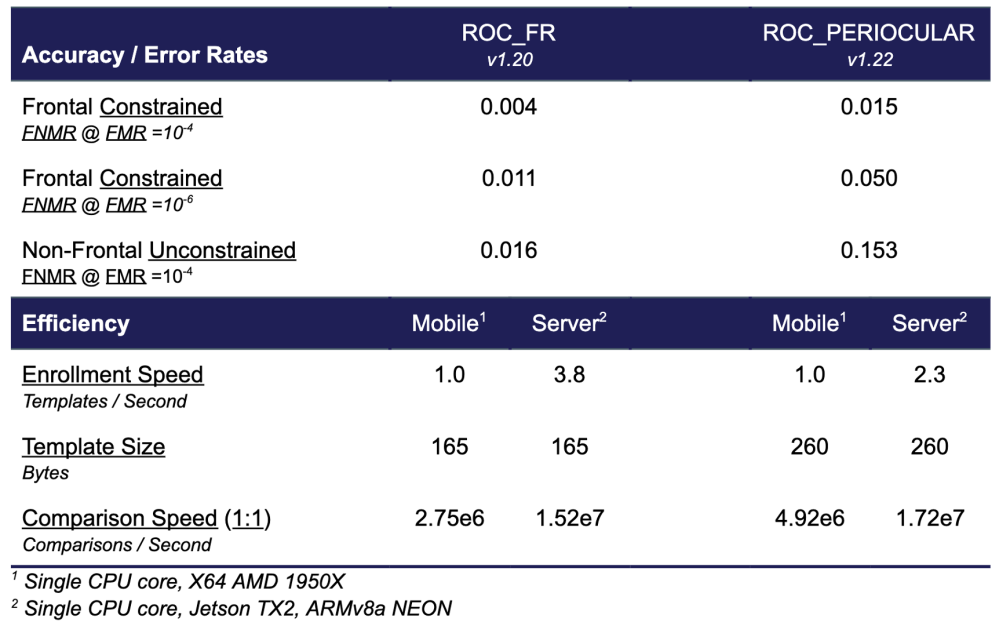 It is worth noting the following:

Additional API features will be provided to enable the ROC Periocular algorithm to easily be combined with the ROC FR algorithm. Thus, an integrator can use ready-made API functions to configure their system to attempt to leverage the full face biometric, and instead switch to the periocular biometric if a mask is present.

Whether or not use periocular recognition or face recognition is dependent on the specific application, use-case, and/or environmental factors encountered by a given system. For example, if it is known that all persons interacting with a system will be wearing a mask, then it makes sense to use the periocular algorithm.

And, while face recognition does still work in the presence of a mask, it is important to realize that in the presence of masks, in the best case, a face recognition algorithm would generalize into a periocular recognition algorithm, as that is the only information available. However, in the worst case, face detection will fail, same-person comparisons will have lower similarity scores, or different-person comparisons will have higher similarity scores.

By providing its user community with access to both face and periocular recognition algorithms, and further providing API features to enable these two modalities to be easily used in tandem, contactless identification systems can be designed that cover the breadth of environmental factors present in the midst of the global pandemic.

Please contact our team to begin an evaluation of the ROC Periocular algorithm.

[1] U. Park, A. Ross, and A. K. Jain, “Periocular Biometrics in the Visible Spectrum: A Feasibility Study”, 3rd Intl Conf. on Biometrics: Theory, Applications and Systems, Washington DC, September 2009.
http://biometrics.cse.msu.edu/Publications/Face/ParkRossJain_Periocular_BTAS09.pdf

[2] U. Park, R. Jillela, A. Ross and A. K. Jain, “Periocular Biometrics in the Visible Spectrum”, IEEE Transactions on Information Forensics and Security, Vol. 6, No. 1, pp. 96-106, March 2011.
http://biometrics.cse.msu.edu/Publications/GeneralBiometrics/ParkJillelaRossJain_PeriocularBiometrics_VisibleSpectrum_TIFS10.pdf

CEO of Rank One Computing and long time researcher of automated face recognition algorithms. View all posts by Brendan